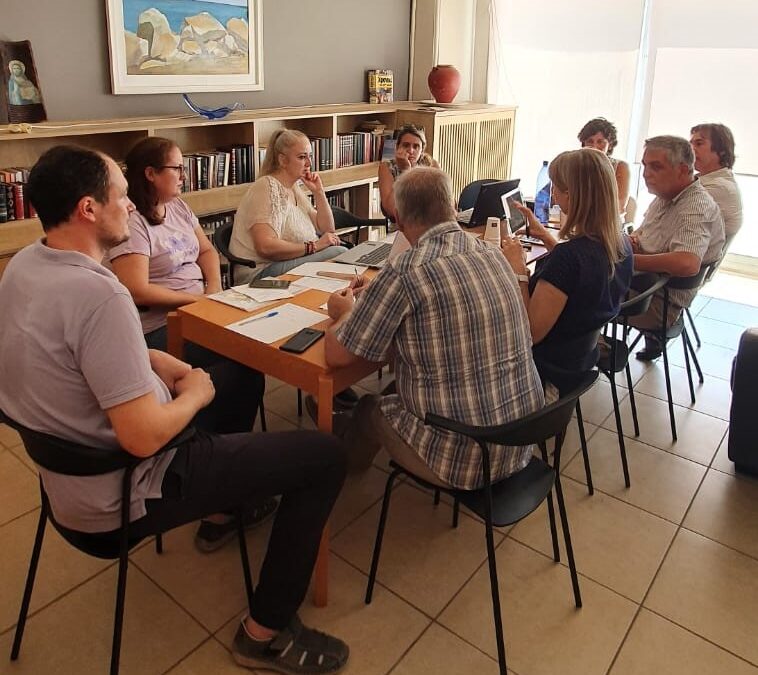 Today, August 31st, #DigitexProject partners met, physically in Rafina, Athens, Greece. This meeting, focused on retaking the advances from the period before holidays, focused on the upcoming outputs to be finished and the students’ Training Activity C1 planned for next October.

The meeting counted with Evangelos Bournous, mayor of Rafina (Pikermi municipality), who visited the consortium in person and congratulated them for the good job.

It started with a warm welcome from the host partner, Cre.Thi.Dev., followed by coordinator partner’s, INCDTP, general explanation about the current status of the project.

Later on, the discussions were directed around the educational materials to be used by the students next October, its development status, the way will they be provided and what is it expected from the students according to these given resources.

Particularly, Kaunas University of Technology colleagues spoke about the IO2, a book about ‘Medical, sensorial and protective textiles development in the context of the European economy and digitalization’ that will be the main tool for students’ course.

Then, AEI Tèxtils provided indications about the IO3, a smart textiles’ materials database targeted on medical, protective, sensorial and smart textiles applications, that will be a reference and support material for students during the course.

And, finally, CIAPE talked about the IO4, a book of best practices entitled ‘Smart sensors based textiles from production management to end-user’ that will compile the most interesting and exploitable outcomes generated by the project.

Next Transnational Project Meeting will take place next November, in Rome.